An early morning start to travel to country races in Ballarat and Bendigo proved worth the effort for Northern members on Sunday with Michael Lavendar winning the Eureka/Northern intraclub handicap at Learmonth, while over at Emu Creek Allison Watt and Jo Read placed second and third respectively in the second race of the Conni Classic women’s series.

Eleven Northern members travelled up to the central highlands to race the all new Twin Mounts course, offering gently undulating roads with the one steep pinch at the end – the infamous ‘wall’ as a fitting finale to the event.

A big thank you to Eureka CC for putting on a great event and making us feel very welcome and also for putting on a great spread of food on after racing. Northern is looking forward to hosting Eureka Cycling Club in three weeks time for race 2 of the intraclub series for the Mary Tams Memorial Handicap to be held at East Trentham on Sunday 13 October.

Meanwhile over in Emu Creek for race two of the Conni Classic women’s series, the 34 minute bunch got up with Allison Watt and Jo Read working well together to finish second and third, but unable to chase down Central Vets’ powerhouse Andrea Wilson (34 mins) who won the 52km race with a convincing lead.

Northern’s Raelene Lesniowska racing off scratch got third fastest time going around the course in just over 1:30 at a blistering 33.8kmh. Thanks to everyone involved in putting on a great event particularly to Central Vets for their hospitality, More Females on Bikes and sponsor Conni. 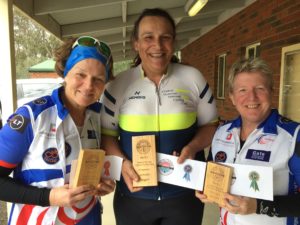