Eureka’s Brad Dawson, in his first ever race, won Sunday’s Mary Tams Memorial Handicap on the tough East Trentham course, with his fellow riders from the 18 minute bunch Peter Livitsanis (Eureka) and Northern’s Stephen Saunders making up the main spots on the podium. Fastest time was won by Northern powerhouse Mark Seddon, racing off scratch.

This 55km handicap was the second interclub event with our friends from Eureka Cycling Club. Thank you to all riders from both clubs for supporting this event in memory of Mary Tams who was a fantastic volunteer for our sport of cycling. Also a big thank you to all volunteers from both clubs who made this interclub series possible – we hope it will get bigger and better in years to come.

Full results on My Laps link below.
https://results.sporthive.com/events/PC1738422

Below is a great race report from Eureka President Dean Wells.

Northern Cycling Club hosted Eureka Cycling for round 2 of the 2019 Interclub Series. Eureka riders were honoured to take part in the Mary Tams Memorial handicap race.

In all, fifty riders pinned on numbers and headed to the start line for five laps of an 11 Km circuit.
Light cloud cover and a light north easterly breeze ensured the temperature did not rise too high as riders tackled the undulating roads.

The race commenced at 10 AM with Northern riders Jo Read (Vice President) and Allison Watt being the Limit duo. The pair made it through the Start/finish line just a few minutes before third Scratch set off.

Most bunches enjoyed a high pace start – that combination of nerves and adrenalin was the downfall of many – with most groups spitting riders out the back.

Having his first race was Brad Dawson from Eureka. The 99th member of the club (in 2019) was formidable in his charge to conquer the challenging Pig and Whistle circuit at East Trentham.
Dawson dominated the downhills and set a solid tempo uphill. He was part of the 18 minute bunch which also included Eureka riders Roger McMillan, Danny Whelan and Peter Livitsanis. The Eureka riders teamed with three Northern riders… at least for the first kilometre. The bunch lost one Northern rider on the first corner! Would the race favourites recover from this?

The 12 minute bunch set off, they fully expected to be caught by the 9 minute group, it was just a matter of how much effort to put into trying to stay clear!

The 6 minute group was Team NORTHERN with just Eureka President – Dean Wells flying the phoenix. They set off at a hellish pace and within 4 kilometres had already lost one Northern rider. Through the start/finish line they lost another Northern rider and by the Pig and Whistle Hotel they were down to just four.
Things looked dire, yet the group recovered and set about working as best they could. Each rider excelling on particular parts of the course.

Similar carnage for the 2 minute 30 second group, with riders struggling from the frenetic pace and the hills.

Scratch was just three riders strong – Tony Giuliano and Mark Seddon representing Team NORTHERN and Jason Hendry the sole Eureka rider. The hills would be the undoing of the Eureka big man…

Closer to the front of the race, the remaining six riders from the 18 minute bunch barrelled along until the third time up the hill. McMillan was detached, then another Northern rider.
Dawson was a machine, powering along with Whelan at the front of the pack – driving hard up any hill that presented.
The remaining four started to pick up dropped riders in ones and twos – there were no bunches left in front, just carnage as the circuit destroyed the front of the field.
The mini train just rolled on with Dawson, Livitsanis , Whelan and Stephen Saunders (Northern) despatching all they came across. Tony Gherxi was one of the few who managed to hold on.

Back in the field the four remaining riders from the 6 minute bunch had a large peloton in their sights. The Northern riders were strong! Troy Morgan was a powerhouse on the flats and downhills, Stephen Maheras monstered his bike and made strong efforts, Morgan Belbruno used his lighter frame to great effect on the uphills and Eureka’s Wells ticked out the pace on the dead flats and the long climb.
It wasn’t graceful, it wasn’t fluid, but it certainly worked and they had tacked onto the back of the main peloton at the bell!

The leaders were one kilometre up the road and always out of sight – this would prove to be a great advantage!
Livitsanis started to play doggo on the back leaving the work to others. Whelan sensed a victory and abandoning all reason, continued to rip himself apart. Dawson was also sensing something – that he was the strongest in the bunch – with “daylight” his nearest challenger…

Northern’s Mark Seddon was going it alone. The Scratch man was chewing up the tarmac from one competitor to the next. There was always a lure – it was brute strength!

Back in the main peloton the 6 minute group had taken control. Wells was on the front, however confusion reigned behind, as most thought they were at the head of the race. Eureka’s Ash Burke rolled to the front and set about the pacemaking with Wells planted on his wheel. The rest – mostly oblivious that they had just ridden themselves out of contention…
Seddon took full advantage of the lull in proceedings as he latched onto the peloton then gradually worked his way forward.

At the head of the race Livitsanis urged Dawson to ramp the pace up as they approached the last turn. And he did.
The others were all looking at each other, trying to work out if anyone had legs left to challenge.
Dawson hit the final climb hard. The small bunch quickly split with Saunders and Livitsanis on his wheel as the rest waved good bye.

Burke led the main peloton into the straight, the numbers had thinned, yet over fifteen riders were still hanging on. Burke swung away to let Wells take the lead. The numbers quickly halved, however approaching the crest Seddon launched down the middle of the road. Those with legs responded – they still thought they were at the head of the race…

A few hundred metres up the road was where the real action was taking place.
Dawson led out the uphill sprint towards the line… opening a gap with each pedal stroke. Livitsanis marked Saunders and watched the newest Eureka member streak away. There was no coming back as Dawson crossed for an impressive 3 length win. Livitsanis skipping out and around the brave Saunders to ensure a Eureka quinella.
Northern’s Lindsay Smyrk a handful of seconds back in fourth, then similar gaps to Tony Gherxi and Danny Whelan.

The faux race had certainly lit up down the road. Desperate efforts by one and all – yet they were only racing for seventh place…
Seddon faltered for the first time in his awesome display as Maheras and Belbruno (both from the impressive 6 minute quartet) collected 7th and 8th places respectively.
Northern’s Cristine Foster crossed in 9th place, just ahead of Seddon. Another 6 minute rider – Troy Morgan – split a host of Eureka riders including Shaun Martin, Andrew Rushton, Bob Braszell and Wells.

A great day of hard racing on a tough course.

Thank you Northern Cycling for the invitation! 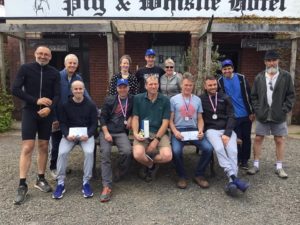 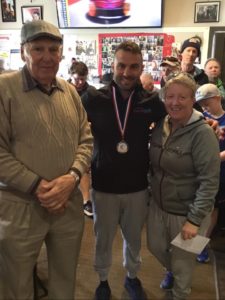 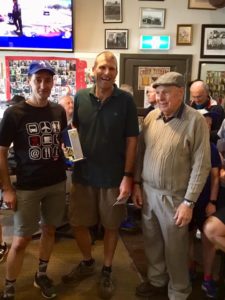 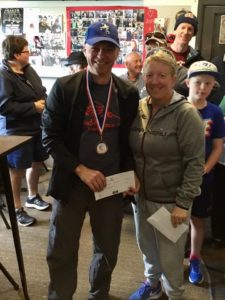